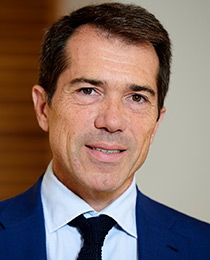 At F2i since 2007, he is General Manager, Chief Investment Officer Equity and Senior Partner of the Investment Area. He has extensive experience in the origination, management and execution of mergers and acquisitions and financing, also thanks to his 16-year career in Morgan Stanley’s investment banking division.

In F2i he led the investments in gas distribution and storage and in Naples airport (GESAC), the participation in the second tranche of SEA’s privatisation, the acquisition of SIA through a consortium with Fondo Strategico Italiano, the acquisition of a stake in the KOS Group (health and social assistance) and in the Farmacrimi retail pharmacy group. He coordinated structuring and fund-raising activities for F2i I, F2i II and F2i III.

Previously, Mr Michelini worked for Morgan Stanley for 16 years, in London and Milan, first in the M&A and Equity Capital Markets team within the investment banking division and then in the European telecom team. He has participated in several corporate finance and capital markets transactions in Europe, including M&A, equity (IPOs, follow-on and convertible offerings), bond and project finance transactions, with a focus on telecom and energy networks.

Over the years spent in Morgan Stanley, Michelini also joined the Italian investment banking team, where he focused on privatisation and infrastructure financing projects, including participation in the privatisation process of Telecom Italia and in 2004 he became Managing Director, covering the Italian Treasury, related entities and regulated companies.

He is a Director and Vice President of 2i Rete Gas, President of KOS, Director of Farmacie Italiane, of CFI and of Ital Gas Storage.

He graduated in Economics from Bocconi University in Milan.