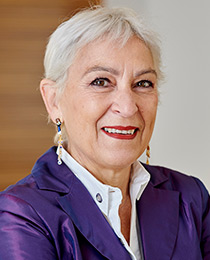 At F2i since 2009, she is Partner and responsible of the company’s Internal Audit. She has been a member of the Supervisory Body of F2i SGR since September 2016. She was responsible for the management of equity investments, and in this role she handled the economic-financial, equity and corporate aspects of the equity investments in the portfolio of F2i SGR’s Funds. She has also been responsible for the administrative and financial aspects of the AMC and the Funds, and has served on the Board of several investee companies.

Previously, she worked for Beni Stabili S.p.A., a major listed real estate Italian company, where she held various positions: head of administration and reporting, management control, internal audit; she was also a member of internal control and of the supervisory body of the Group’s AMC.

She was also a Financial Analyst at Fidimi Consulting, a consulting firm operating in Italy and abroad, part of the Imi Group, where she performed due diligence and assessment of development projects and new investments on behalf of Imi and the Ministry of Foreign Affairs; later, she participated as a financial expert in establishment of the first closed-end real estate fund.

At Ageni, an Eni Group company, she was head of the implementation and contracts service; she developed new job-saving initiatives for the group’s manufacturing operations experiencing a crisis.  From 1981 to 1985 she worked for Gepi, industrial management and shareholdings company, performing due diligence, auditing and management control activities on the group’s investee companies.

She is a chartered accountant and auditor. She has a degree in Economics and Business Administration.