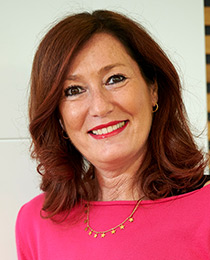 She began her professional career with important companies in the fashion, film, television and advertising sectors, as a sales manager and as supplier and customer relationship manager. She also volunteered in the social sector and at the city libraries of Rome, as an expert of computer cataloguing.

She has a degree in Modern Foreign Languages and Literatures from La Sapienza University, Rome.

After graduating, she obtained a Master’s degree in Public Relations from La Sapienza University, Rome.