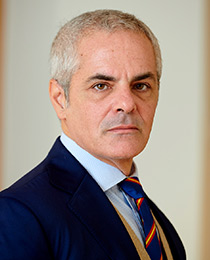 With F2i since 2018, he is a Senior Partner and Head of Strategy & Business Development. He performs analyses and assessments, both sector-wide and on the operations of target or portfolio companies, and on the regulatory framework of the countries and sectors of interest. He also designs our AMC’s strategy with regard to products, markets and analysis of ESG issues.

He gained 20 years’ experience in London, where he worked as an equity analyst, first for strategic consulting firm LEK Partnership, continuing with Flemings Securities, CITI and Société Generale until 2016.

He was head of the Pan-European Utilities Team. During his London period, he also handled several IPO transactions, including Snam, Gaz de France and Enagas, as well as M&A transactions such as the acquisition of Enel’s former power generation companies (GenCos). His team was ranked 1st in utilities research in Europe for nine consecutive years (2000-2009) by Extel and Institutional Investors while he was ranked individually 3rd in 2004 and 2nd in 2009 (1st in Italy from 2003 to 2009).

In 2016 Alberto worked as Head of Strategy, Market Analysis and M&A at Terna, developing models and scenarios for the electricity and energy markets for both Italy and Europe, as well as scenarios for the commodities market, which served as inputs for the broader national energy plan coordination project for the two Italian transmission system operator of gas and electricity. He also prepared the Strategic Guidelines for Terna’s business plan, which were then presented to the financial community in 2017.

He is a member of the Board of Directors of Sorgenia and Ital Gas Storage.

He graduated in Economics from Bocconi University in Milan. In addition, he took specialization courses in Finance and Advanced Econometrics at the London School of Economics.