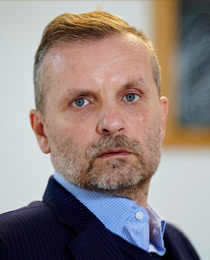 He managed the acquisition of Sorgenia, of the port terminal companies FHP (formerly PdC SpA), and Marter-Neri (from whose aggregation was born the first Italian port operator in the bulk segment), of a minority stake in the concessionaire of the water service in Genoa, Iren Acqua, and the investment of the Fund in the waste to energy company TRM, subsequently sold. He also participated in the creation of the Joint Venture Enel Stoccaggi.

In the past he was head of Project Finance for Banco Bilbao Vizcaya Argentaria in Italy.

He has been involved in more than 70 financing transactions and has originated and structured as MLA project financing related to fifteen wind farms, two CCGT power plants, one WTE power plant, one hospital, three water distribution concessions and three freeway sections.

He serves on the Board of Directors of Sorgenia, EF Solare Italia, F2i Holding Portuale, MarterNeri, ReLife and He is also Vice President of IREN Acqua.

He holds a degree in Business Administration from the University of Parma and an MBA from Insead (France).