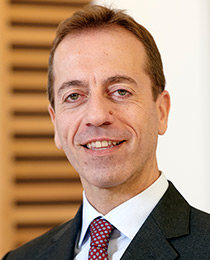 At F2i since 2011, he has been Head of the fund management business unit since 2017. His duties at F2i include managing financial flows to and from investors, planning the Funds’ treasury with respect to current operations, investment projects and existing loans, preparing quarterly reports on operations, submitting periodic reports to the supervisory authorities (Bank of Italy, FIU, Consob and the Revenue Agency) and managing investors’ AML/KYC issues in support of the Compliance function. He collaborates with the Investor Relations function in the collection, verification and subscription of Fund units and supports it in the management of investor requests.

He was previously an associate at the equity investments management control business unit, where he handled the investments in the renewable energy, airports, waste to energy and TLC sectors.

In 2010 he was director of a Luxembourg-based fund administration company.

From 2006 to 2009 he worked for Simest in the Development and Advisory area and subsequently was member of the CEO’s staff, with a focus on Italian investments in non-EU countries.

Previously, he worked in Ireland at HP International Bank’s EMEA Headquarters in the area of equipment financing.

Between 2005 and 2006 he completed the master course in International Financial and Business Analytics organised by Simest and held by Sda Bocconi and University La Sapienza (Rome / Hangzhou).

In 2005 he obtained with honours the Professional Diploma in Global Trade and E-business from the Institute of International Trade of Ireland (Dublin). In 2002 he graduated with honours from the Faculty of Economics and Business Administration of the University La Sapienza, Rome.