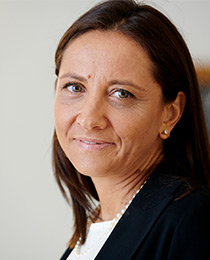 At F2i since 2007, she is a Partner in the Investment Area. She has extensive experience in mergers and acquisitions and financing transactions in the infrastructure field, with a focus on the airport sector and transportation and logistics.  In F2i she worked on all the acquisitions and divestitures in the airport sector (acquisitions of Gesac – Naples airport, SEA – Milan, Sagat – Turin, Sogeaal – Alghero, Aeroporto di Bologna e Aeroporto Friuli Venezia Giulia - Trieste; sale of Florence Airport; creation of a partnership with Ardian e Credit Agricole Assurances through the sale of 49% of the holding company 2i Aeroporti). In addition, Laura worked on the investment (and subsequent divestiment) in the logistics company Interporto Rivalta Scrivia (intermodal hub) and the acquisition of a minority stake in tollroad holding company Infracis.

Previously, she worked in the investment banking sector at Lehman Brothers and then at Capitalia Group (today Unicredit), as Director in charge of clients operating in the airport & airline, port & shipping and oil sectors. She has handled many M&A, financial restructuring and financing transactions and equity placements. In the infrastructure sector, she has worked on the privatization of Aeroporti di Roma; the subsequent acquisition of Aeroporti di Roma by a consortium led by Edizione Holding; the attempted privatization of Sea Aeroporti di Milano; the industrial plan of Anas (Italian Road Agency); the creation through mergers of the multi-utility company Enia (today Iren); the financial restructuring of the Italpetroli Group.

She is a member of the Board of Directors of portfolio companies: Gesac, Sagat, Geasar, Bologna Airport, Sacbo, Sogeaal and Aeroporto Friuli Venezia Giulia.

She graduated in Business Administration from LUISS Guido Carli University in Rome.