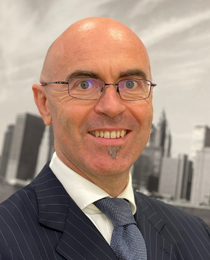 With F2i since July 2021, Luca is Investment Director of the Debt Investment Team. With a carrier started in the industry and then in structured finance, where he spent more than 17 years in Project Financing, Luca has developed a wide and diversified experience. In aggregate, he has structured and managed more than 25 transactions for a total value of ca. € 10 billion.

Before F2i, Luca has been for 10 years the Head of Portfolio Management Project Financing Italy at Credit Agricole CIB -taking care of all the post-closing activities on the portfolio, spread across all sectors. He managed infrastructure transactions (metro lines, airports, hospitals, motorway concessions) and power deals (wind, solar), as well as gas transportation and storage projects.

His working experience started in the Business Development & Supply team of Edison Gas where, from 1999 to 2001, Luca was part of the negotiation team for several gas import contracts and then joined the project team of Egyptian LNG -an upstream/midstream project developed in jv with British Gas. From 2002 to 2003, Luca was Business Development Manager at E.ON Italy, with a specific focus on contracted CCGT power plants.