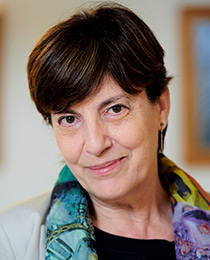 At F2i since 2013, she is a Senior Partner and Head of Regulatory, Legal and Corporate Affairs. She has extensive experience and knowledge in EU and international law, competition law (in particular energy, telecommunications, liberalizations and privatizations) and regulation of infrastructure sectors, with over 25 years of career in EU institutions and at the AGCM (the Italian Competition Authority).

She was head of Alitalia-CAI’s Regulatory, Legal and Corporate Affairs Department. She also served as Secretary to the Board of Directors and the Executive Committee for the same company and managed antitrust and EU aspects as a consultant during the start-up phase.

She was a consultant to the AEEG (the Italian Electricity and Gas Authority) and the Italian Ministry of the Economy (Department for Fiscal Policies), as an expert in EU law.

She was Head of Cabinet and then Secretary General of the AGCM, participating in the meetings of its Board and was responsible for the functioning of the Authority’s services and offices. In this position, she played a major role in decisions on anticompetitive agreements (air, energy, banking and insurance sectors), abuses of dominant positions (in particular in the telecommunications and energy sectors) and concentrations.

She is currently professor of International Law at the Faculty of Law of the LUM Jean Monnet University of Bari; member of the college of lecturers in the PhD course in EU Competition and Market Law at the Suor Orsola Benincasa University in Naples. She was a former ordinary member of the Superior Council for Communications.

She has a degree in Political Science from the Federico II University of Naples.